On Saturday, I finally ran my first ultramarathon. The Skyline to Sea Marathon and 50K was organized by Pacific Trail Runs. The sense of camaraderie throughout the race was palpable and inspiring. It’s important to note that road marathons and trail marathons are not the same animal. And, road marathons and trail ultramarathons are definitely not the same animal. Hills and more hills: long, short, steep, rolling, and everything in between. Forget pacing strategy, forget predictability. Everyone was advised beforehand to run flats, to walk the uphills, and to negotiate the downhills. And, as the race director put it, “Run the uphills if you must but start walking when it just feels stupid.”

Almost six hours from the start of the race, after three near falls and one good dirty one, a serious cramping on my inner right thigh (oddly, this is where I had a cramp at mile 21 of the Napa Valley Marathon), and plenty of time to enjoy the forest and surrounding redwoods, I ran through the finish line. I have never felt more exhilarated to finish a run. 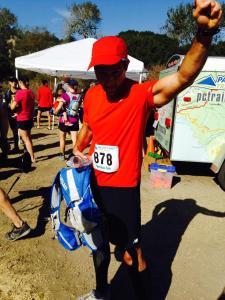 This was the first endurance event I’ve done after trying to become “fat-fueled”. I followed Vespa’s OFM protocol. Because of this, I’ll post how I specifically implemented it, pre-, peri-, and post. The two most noticeable differences were that my reliance for fuel was curtailed due to the increased reliance on plentiful body fat for fuel and the fact that I never experienced a bonk or an energy low. In fact, there were several stretches where I felt like the energy flow was just about perfect. The question, always, is whether that perfect energy flow is something that I can generate more consistently throughout my next event.

The night before I added 6 oz. of steamed butternut squash covered in coconut oil and butter to a meal of chicken breast and greens and followed this fueling plan for the day:

I wanted to make it through by relying on aid stations to replenish my water. I did not eat anything from the aid stations.

45 minutes in (and subsequently repeated each hour from then): 1 VFuel gel and one Vespa CR-25

60 minutes in (and subsequently repeated each hour from then): 1 Hammer Anti-Fatigue Cap and 2 BlueBonnet BCAA pills.

Almost six hours from the start of the race, after three near falls and one good one, a serious cramping on my inner right thigh (oddly, this is where I had a cramp at mile 21 of the Napa Valley Marathon), I ran through the finish line.

Afterwards, I had an orange and some watermelon, an organic active greens bar, and lots of water. Hobbled over to the ocean and stood in the freezing Pacific for 15 minutes.